This morning, the blockade to stop the Maules Creek coal mine and protect Leard State Forest has swelled to over 100 people. We have closed down Whitehaven's access to the site, and construction work inside. 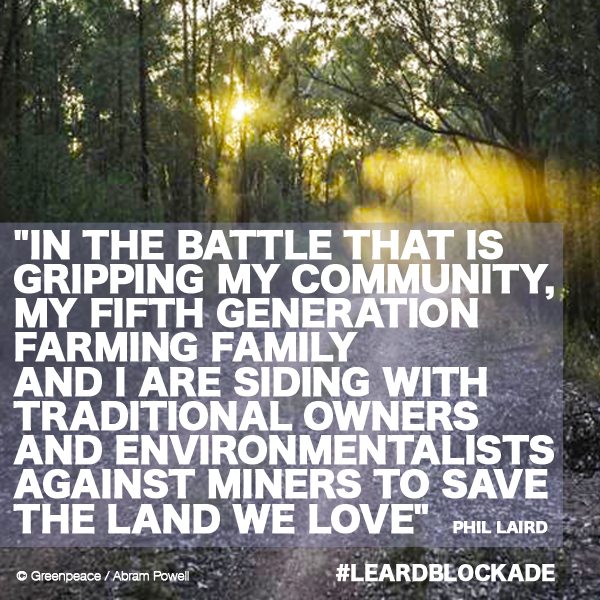 People in their 20s, 30s, 50s, 60s and 70s have come from all over Australia to stop Whitehaven Coal’s contractors entering the site and building the mine. One man in particular is Bill Ryan, a legally blind 91-year old Kokoda veteran, who is risking arrest with his 65-year old son.

We have had a huge two weeks, and a huge three days, and the blockade has got to grow and intensify from here.

Photos: live action from the blockade

The Maules Creek mine will be the largest new coal in Australia. If we don’t stop it, thousands of hectares of Leard State Forest – home to 34 endangered species including the koala – will be destroyed. Surrounding farming communities will be devastated as the mine drains the water table and dumps thousands of tonnes of dangerous coal dust. And our climate will cop a serious blow as 30 million tonnes of carbon pollution are released each year.

We need your help. If you’d like to join the blockade and get involved in upcoming events at Maules Creek, write to [email protected]

If you want to help us push the story, join the conversation using the Twitter hashtag #leardblockade

And if you’re really riled up, give Greg Hunt a call and ask him why he hasn’t responded to calls for a protection order for Aboriginal cultural heritage sites in the project or released the review of Whitehaven’s dodgy biodiversity offsets. You can call him on (02) 6277 7920 or Tweet to @GregHuntMP

Get informed, get active and get up here. Together we can win this one.