Billions of bags: The cost of inaction on plastics in NSW and Victoria

Last Friday 28/07, state and territory environment ministers met in Melbourne. Plastic pollution was on the agenda - and there was a great deal of hope that NSW and Victoria would finally join the movement to ban single-use plastic bags.

Last Friday 28/07, state and territory environment ministers met in Melbourne. Plastic pollution was on the agenda – and there was a great deal of hope that NSW and Victoria would finally join the movement to ban single-use plastic bags.

Unfortunately, this didn’t happen. Queensland and Victoria made a statement about the need for a national ban on thick plastic bags, but didn’t say a thing about single-use plastic bags – a bit cart before the horse. And NSW stayed resolutely silent.

The lack of movement from NSW and Victoria state governments is especially frustrating in light of the recent initiative taken by major supermarkets to voluntarily phase-out single-use plastic bags. Instead of building on the momentum created by Woolworth’s announcement on 14 July, NSW Premier Gladys Berejiklian used the voluntary action as an excuse to do nothing, saying NSW didn’t need to ban the bag “because 80 per cent of plastic bags” will already be banned by the supermarkets themselves.

This comment was widely reported in the media, but no one questioned where she got the 80% figure from. We decided to look into it ourselves and as we demonstrate below, we don’t think it has any basis. However, it is important to note that even if it is correct — if, say, she knows something we don’t know — then it is still ridiculous to ignore 20% of a major problem like plastic bag pollution.

Premier Berejiklian may have based her claim on the widely held assumption that Coles and Woolies control 80% of the supermarket market. This has been debunked. Recent data suggests they have a combined market share of 68.9%. However, if we also add in Aldi (because they don’t provide single-use plastic bags) and IGA (who are also phasing out) and some other shops like Harris Farm, then the number increases to more than 91.4% of supermarkets in Australia phasing out lightweight plastic bags.

This is certainly great news. However, as every Australian would know, there are other businesses that offer these bags. A NSW EPA report from 2016 suggested that based on 2007 data, 75% of lightweight plastic bags are estimated to come from supermarkets and the other 25% from fast food restaurants, liquor outlets, convenience stores and other retailers. While the consumption of plastic bags has probably increased substantially since 2007, there is no reason to assume that the proportion that come from supermarkets has increased.

How many bags are we talking about?

Woolies should be applauded for disclosing that it gives out 3.2 billion single-use bags per year, and other retailers should follow suit so that we can get a more accurate picture of this problem.

Many reports (including from government agencies) suggest that Australians use 4 billion single-use plastic bags per year. However, we now know that the number must be much higher. Victoria has a more reasonable estimate of 7-8 billion bags used nationwide. However, this still appears likely to be an underestimate given Woolies’ disclosure.

If we remove Aldi from the market (because they never provided lightweight bags) then Woolies should be responsible for about 41.1% of supermarket plastic bags based on market share. This means the total number of plastic bags attributed to supermarkets should be around 7.8 billion. Let’s make that estimate more conservative by assuming that some of Woolies’ bags are from their other retail outlets (e.g. Big W) and say 7.3 billion total for supermarkets.

If we add another 25% to the estimate of 7.3 billion, to take into account the contribution of other businesses, then we get to a total of 9.7 billion single-use plastic bags used annually in Australia.

We should emphasise that this is just our best guesstimate! We need better data from businesses and governments to get a more definite picture of the scale of this problem. 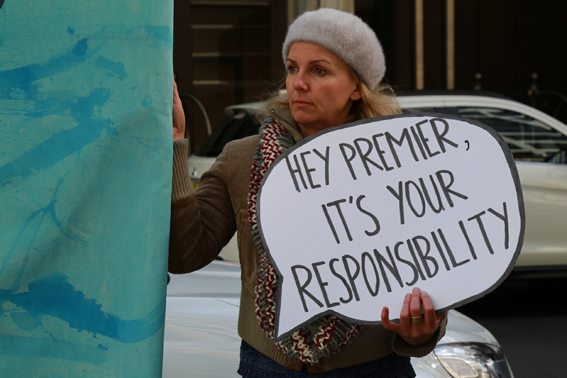 Greenpeace supporters demonstrate outside the venue of a meeting which News South Wales State Premier, Gladys Berejiklian attended, with a banner bearing a clear message: Ban the Bag (#BantheBag).

So how many bags is Premier Berejiklian ignoring?

If we assume that we can roughly estimate the number of plastic bags used in each state based on population, then we can determine NSW’s share of Australia’s estimated 9.7 billion bags.

First we need to remove 11.84% of the Australian population already under state/territory plastic bag bans (SA, ACT, NT, and Tas). Note that while Queensland has passed legislation to ban the bag, that ban is not yet in effect and it therefore doesn’t count for the purposes of this calculation.

As noted above, 31% of these bags will not be covered by the voluntary action by supermarkets. That means 1.1 billion bags in NSW and 868 million bags in Victoria.

That is close to 2 billion single-use plastic bags that will still be in circulation every year if we don’t get action at the state level!

Even if we don’t extrapolate from Woolies’ disclosure and accept the Government of Victoria’s estimate of up to 8 billion bags being used in Australia every year, then based on population there will be 1.6 billion bags not covered by voluntary action.

So whichever way you look at it, we are talking about well over a billion bags that the state governments of NSW and Victoria can do something about right now.  Let them know that you think they should ban the bag!