Bad time down under for APP gets worse

It’s been a busy couple of weeks for Steve Nicholson, the corporate affairs director for Asia Pulp and Paper (APP) in Australia and New Zealand. Fresh from a PR crisis in Australia - caused when his staff were found out for anonymously posting offensive comments online about a Greenpeace staff member and APP’s former largest customer in Australia - Steve is trying to play hardball in New Zealand. 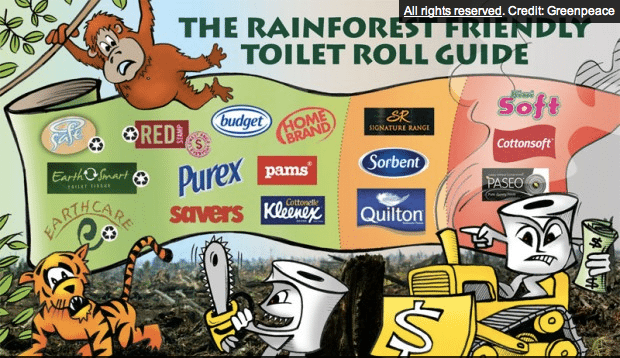 On Monday, together with WWF and the New Zealand Green Party we released a ‘forest friendly’ tissue guide (pdf) based on a survey of all the major retailers and suppliers selling tissue products in the country. One of the companies they approached was Cottonsoft, a well-known Kiwi brand that was bought out a number of years ago by – yes, you’ve guessed it – APP.

APP/Cottonsoft refused to participate in the survey so earlier this year a range of their products were purchased and sent off for fibre testing at IPS Global. IPS is a heavyweight independent testing lab used by major companies in the international paper industry like Kimberly-Clark, SCA, International Paper and Procter & Gamble. Oh, and the US Department of Defence and the FBI.

The results revealed the clear presence of mixed tropical hardwoods or MTH in two of the four samples tested, clear evidence that part of the fibre tested came from rainforests. Unfortunately that’s no surprise, given that APP is still destroying rainforests in Indonesia for its pulp and paper products.

Then it all went a bit crazy. Steve claimed that our accusations were completely false, that they were being unfairly targeted and that all APP’s New Zealand products were certified by the Programme for the Endorsement of Forest Certification. Even though the products we bought weren’t labelled as PEFC-certified.

As a matter of courtesy, we wrote to Steve and sent him the test results (which were copied to PEFC as well), explaining that, whilst the PEFC scheme has serious problems, APP’s own auditors had told us there aren’t supposed to be any Indonesian rainforest fibres in APP PEFC products. So, this either means Steve wasn’t being very honest about his claims, or he had just uncovered a major scandal involving the world’s largest forest certification scheme.

Cottonsoft was quick off the mark in replying with another press release. This time the approach had changed. Apparently our test results were the product of “guesswork”, IPS weren’t qualified to do the testing and we were putting New Zealand jobs at risk. And again, the products were all PEFC certified. What do they say about being in a hole and stopping digging?

So the most notorious forest destroyer in Indonesia is now lashing out at an independent paper testing lab trusted by clients like the FBI and pretty much every one of APP’s international competitors in the paper industry. Not only that, but it claims that by pressuring APP to operate responsibly in Indonesia, Greenpeace is threatening jobs in New Zealand. Go figure.

Sadly, these tales of obfuscation and denial are not new, but they are certainly helping more of the company’s customers see just what sort of operator APP really is right now. Despite the multi-million dollar marketing campaigns, huge PR budget and the increasingly ridiculous adverts painting a glossy picture of a paper producer masquerading as a conservation organization, APP is still destroying Indonesia’s rainforests.

Yet one of New Zealand’s retailers – the Warehouse – has already taken the responsible action of suspending orders of Cottonsoft pending an investigation, and hopefully others such as Foodstuffs and Progressive Enterprises will follow.

Its time for APP to see sense and change its course, following the lead of its sister company in the Sinar Mas group, Golden Agri Resouces. Earlier this year Gar, supported by the Forest Trust, announced a forest conservation policy which should, if implemented fully, see an end to deforestation for their palm oil operations.

Compare and contrast that positive step forward with the denial and deceipt from APP.

For further updates on this story, follow the Greenpeace New Zealand blog.

Correction: this story originally stated that the Warehouse has suspended purchases of Cottonsoft “until APP commits to end its role in rainforest destruction”. This has been amended.