Last night our two activists were removed from the survival pod that had been suspended from the Leiv Eiriksson oil rig for four days. They were arrested just before midnight last night, local time, and taken to the Greenland capital of Nuuk. The Greenpeace ship Esperanza remains just outside the 500m exclusion zone, imposed by a Danish navy warship, around the drill site. Captain of the Esperanza Madeleine Habib blogs for us directly fom the ship. 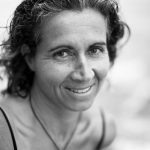 Yesterday evening the Danish and Greenlandic forces moved in to remove The Pod. Through falling snow we watched as climbers descended from the Leiv Eiriksson to force our activists to end their Arctic vigil. An exclusion zone of 500m had been established around the rig so we were unable to intercede.

Hats off to Greenpeace activists Luke & Hannah who spent four days & three nights suspended high above the Arctic waters in defence of this wild and fragile environment.

The atmosphere on the Esperanza bridge was subdued as we witnessed the end of the first phase of our activities to prevent Cairn Energy from drilling exploratory wells in the Arctic.

It was a sad moment to watch The Pod being lowered into the ocean and loaded onto the helideck of Danish Offshore Patrol Vessel, Knud Rasmussen. Over the years I have been part of a several campaigns where The Pod has provided refuge for activists in extreme conditions. The robust survival capsule, and her predecessor, are a treasured part of Greenpeace history. Pod 1 was first used on the isolated Isle of Rockall during the Atlantic Frontier campaign in the 1990s. Pod 2 was con

structed in 2000 and has sheltered activists on seven oil rigs and been part of many other direct actions. I am sure that we will soon have Pod 3 to keep Greenpeace activists safe & warm & dry.

The Esperanza and here crew are still here standing by the Leiv Eiriksson at the Atammik drill site in the Davis Strait. The drill ship Corcovado, also chartered by Cairn Energy, has commenced operations at the Lady Franklin site to the south of us.

Water depths here are around 900m and more than 1000m at Lady Franklin, icebergs are a navigational hazard, Arctic lows sweep across this stretch of water even in summer months. This is a wild and remote place.

It is no place for oil exploration. We will remain and continue to demand the end to Cairn Energy’s activities in the Arctic.

The Lady Franklin drill site is named for Lady Jane Franklin. Like me she lived in Tasmania and had a deep affection for the wilderness. The Franklin River bears her name. Lady Franklin mounted an expedition to search for her husband, Rear Admiral Sir John Franklin, who was lost in these waters looking for the North West Passage. All members of Sir John’s expedition were lost. But the real tragedy is that even more men & ships were lost during Lady Jane’s search for Sir John.