APP rehomes a tiger after cutting down its forest home

The news from Indonesia today that Asia Pulp & Paper (APP) has moved a tiger from one part of South Sumatra province to another in order to protect it. 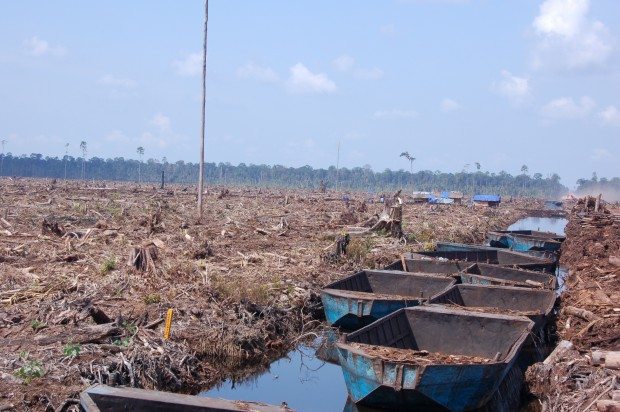 Cleared forest in Sumatra, in what was once tiger habitat – ©Greenpeace

This is supposed to prove that company has green stripes. But, as with anything emanating from the APP publicity machine, scratch beneath the surface and you’ll find an altogether different tale.

We know how much APP likes to paint itself as nature’s friend, as in its recent adverts. So as part of attempts to give itself an air of responsibility, APP has sponsored the capture, relocation and release of a Sumatran tiger – remember, only about 400 of these magnificent creatures remain at large.

The female tiger in question, named Putri (or Princess in Indonesia), has been removed from what is described on APP’s Rainforest Realities website as an area in which humans and tigers come into conflict, but is also where considerable tracts of rainforest have been cleared, supplying APP with timber. Today, the tiger was released back into the wild further north from its starting point, in a national park further away from logging being done in the name of APP.

There’s no doubt that conflict between humans and tigers can have terrible consequences for all concerned. We saw last week how this can end for tigers with the release of a video of a dying tiger caught in a trap in an APP group concession in Riau. And earlier this year, two people were reportedly killed by a tiger in an area supplying APP with timber in South Sumatra, the same region of Sumatra where the tiger relocation is taking place.

(Incidentally, this very same supply area has also been classified by the Programme for the Endorsement of Forest Certification (PEFC) as ‘non-controversial’, just like the spot where recently another tiger died while caught in a snare.)

But APP’s attempted good news story disguises the real reason why many of these clashes between people and wildlife are taking place. Destroying the forests which provide hunting and breeding grounds for tigers (as APP is doing) forces them closer to areas populated by people, and then it’s only a matter of time before someone (or something) gets hurt. In just one logging area in South Sumatra, APP has been responsible for the loss of 27,000 hectares of rainforest identified as tiger habitat since 2007.

Large animals need equally large areas to roam in search of food, especially predators. Fragmenting their habitat with roads and through clearing forests leaves them with smaller and smaller places to go. But it’s not just about tigers, either. These same regions of Indonesia’s rainforests support thousands of species, including many endangered ones, and they can’t all be relocated individually.

Make no mistake, APP is destroying forests which form vital habitat for tigers like the one it so generously rehomed today. So while it’s a nice feelgood story, APP itself created a large part of the problem which it’s now suggesting it is helping to solve.