Not every penguin is up to the challenge of living in the Antarctic, but those that do are a special sort of awesome. Remember, they don’t have the luxury of being able to fly away again if the weather turns bad. 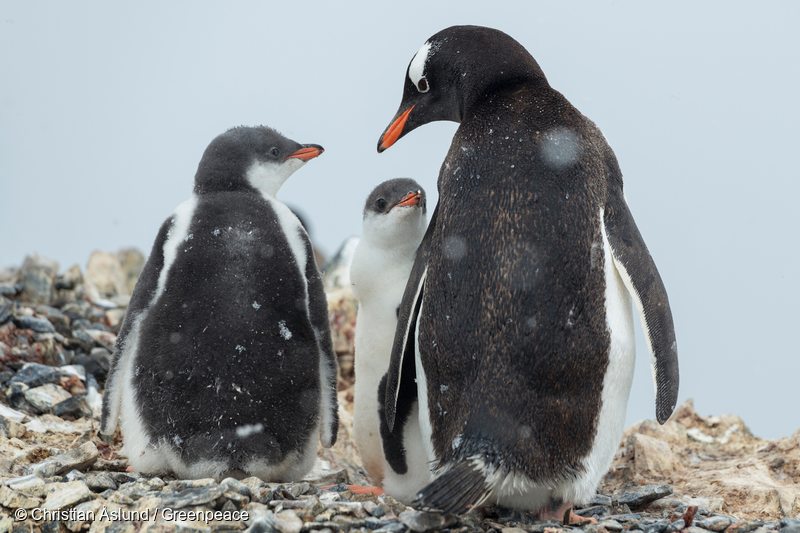 Here’s our countdown of the most flippering fantastic Antarctic penguins. Prepare to be impressed. 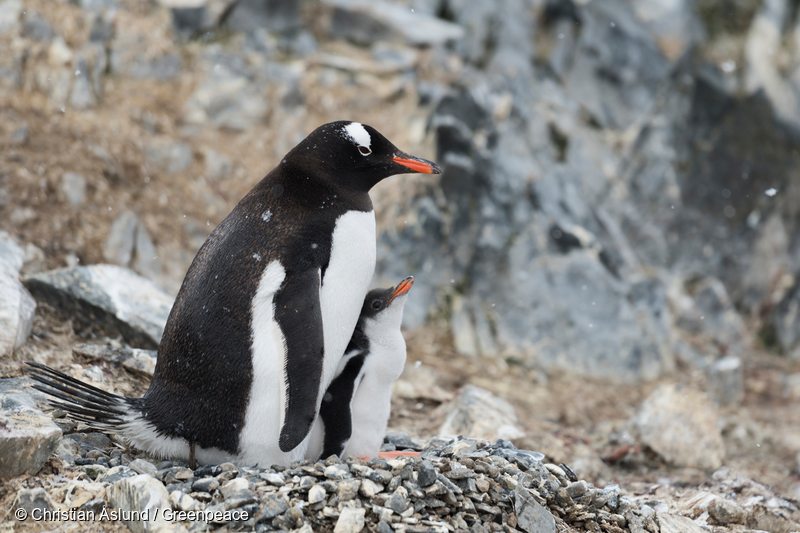 Gentoo penguins are easy to identify by the natty white triangular patch above their eyes, which stretches across the top of their heads. They prefer ice free areas, so they stick to the coastline of the Antarctic Peninsula and offshore islands. Gentoos have sticky-out brush-like tails, and can throw their heads back to make a very loud trumpeting noise, a honk that sounds much more impressive than their 75cm stature would suggest. Plucky little Gentoos can make hundreds of dives every day while foraging for fish, krill and small squid, and are thought to be the fastest swimming penguin underwater, reaching speeds up to 36km per hour (22mph). 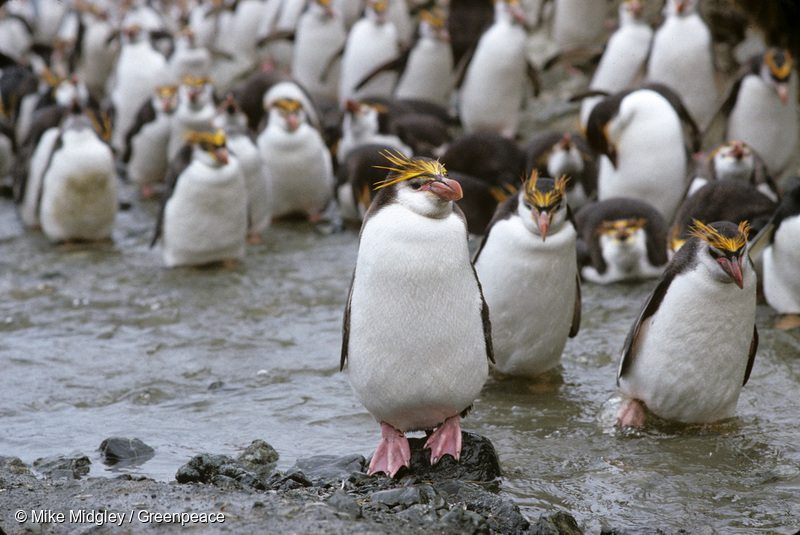 No, it’s not just a type of pasta, it’s also a species of penguin, close cousin to the better-known Rockhopper. The monogamous Macaroni is the most southerly of the crested penguins, doesn’t seem to venture much beyond Antarctic waters, and nests on the Antarctic Peninsula as well as nearby islands. With a splendid yellow mop of a crest, these krill-munching bombastic braggarts might seem more suited to political office in current climates. 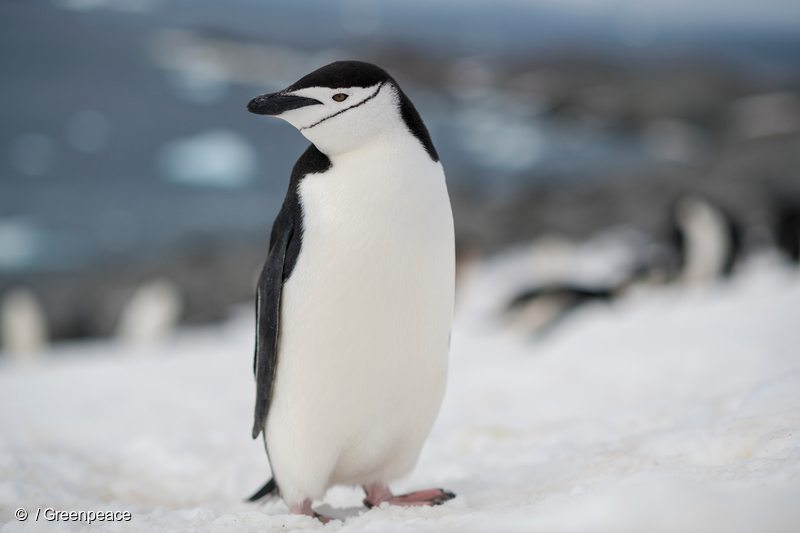 These are the penguins that look like they should be wearing a helmet, otherwise – what’s the point of that chinstrap marking, really? Chinstraps can look squat and serious, and that’s fair enough, as their lot is no laughing matter. Monogamous, they return to the same partner and busy breeding site every year, often choosing hard-to-reach rocky islands to keep themselves and their chicks safe – but that safety comes at a cost as they have to navigate perilous rocky cliffs, and stormy Antarctic seas to be able to feed their mate and their young. A helmet might not be a bad idea after all, guys… 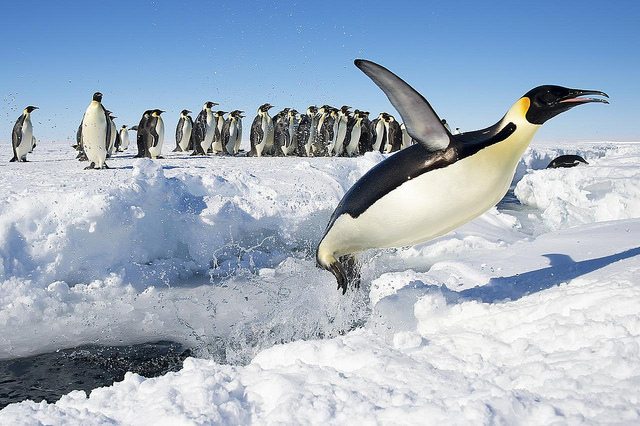 Narrowly missing out on the top spot is the daddy of them all – the Emperor penguin. The biggest living penguin species, they can reach a whopping 1.3 metres tall, and weigh up to 40kgs, about the same as a 12 year old child. Not only are they the biggest, but they also dive the deepest, down at least 550m into the icy Antarctic Ocean to catch fish and squid. Scientists have recently discovered that Emperor penguins are especially well adapted to life underwater thanks to bubbles making them more streamlined and hydrodynamic than any Olympic swimmer. Emperor penguins are proper hardcore – not only do they survive the harsh winter on the continent of Antarctica, but they also breed and raise their fluffy chicks in the middle of it. Massive huddles of stay-at-home dads continuously shuffle around to stay warm and protect their eggs and newly-hatched chicks, whilst the females go off hunting to bring back food. They are undoubtedly the most Antarctic of all the penguins, and definitely win a ‘best dad’ award too.

But since you missed out on the prize by a beak, sashay away Emperors! 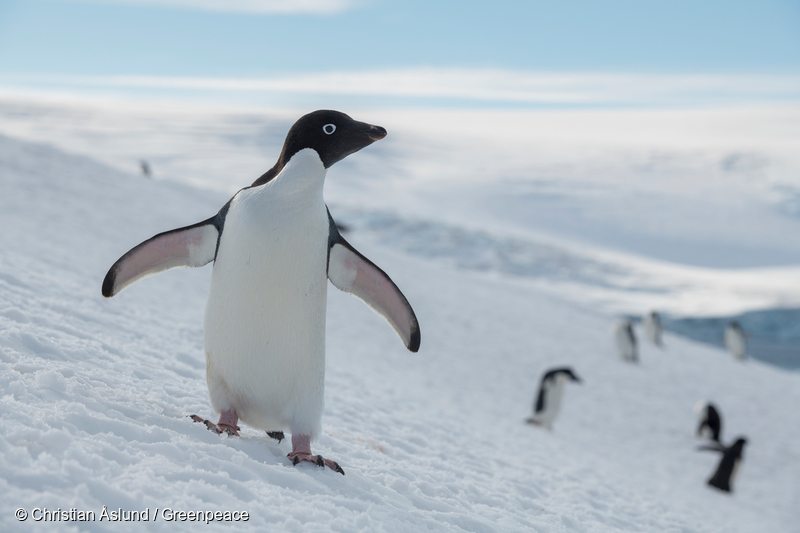 Top of the pile, is the Antarctic’s very own rockstar penguin – the cute, cuddly, and utterly badass Adélies. Growing to no more than 70cm, these pocket rockets might seem ill-equipped when waddling on land, but are top krill-catching torpedoes in the water.

These little penguins are ridiculously adorable, and probably the most penguiny of all penguins, but behind those cute and cuddly looks lies a tough Antarctic specialist, found all around the Antarctic coast. They breed nowhere else on earth, and spend winters offshore in the Antarctic ocean.

They are so tough, that they make their nests out of rocks! Rocks and pebbles are the currency that keeps Adélie society functioning – being offered as love tokens to woo a mate, pinched from neighbours when they are not looking, and, err, traded for stolen moments of passion.

Yes, the big brave Emperors are the undisputed king on the icy continent itself, but for sheer penguin awesomeness, entertainment and pebble-pinching prowess, we think the pint-sized pluck of the Adélies makes them Antarctic’s top penguin.

Join the movement to create world’s largest protected area and a safe haven for penguins – an Antarctic Ocean Sanctuary.