Another campaigner kicked out of Indonesia for fighting APP’s deforestation 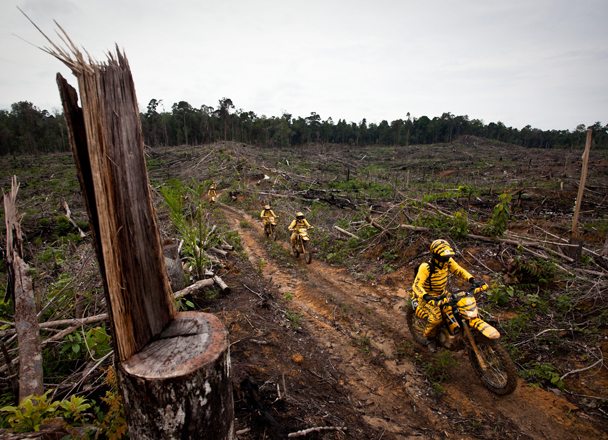 Until last Wednesday, I was in Indonesia. I’d travelled there to work with colleagues in Jakarta and Sumatra on our continuing campaign to end the devastation of the country’s magnificent rainforests.

But after an extremely intense few days, I left the country prematurely on Wednesday evening. I had been due to stay longer and had a business visa to allow me to do that, but the advice we were receiving was  that if I stayed it was likely to bring more risk to my colleagues working there. I feel very sad about leaving, not least because the last parting gesture from a group of officials at the airport was to place a large red deportation stamp in my passport.  I was not even informed I was being deported. I was stopped whilst queuing at immigration to leave the country, interviewed for an hour and then rushed at the last moment onto a plane to Singapore. My passport, with its prominent new stamp, was handed to me as I entered the plane. I don’t yet know when or if I will be allowed back into a country that I have enjoyed visiting so much for nearly a decade.

So, why was I deported? Currently, I work on the campaign to reform the practices of Asia Pulp and Paper (APP), an Indonesian company which, as our growing dossier of evidence shows, is still destroying huge tracts of rainforest. I work with our international team across a range of countries to find ways to encourage APP to change and to expose its extraordinary greenwash. I am also in regular contact with some of the major international businesses that have recently suspended contracts with APP.

Before this I had been working with my Indonesian colleagues who negotiated with Golden Agri Resources (GAR), which like APP is part of the Sinar Mas group. Earlier this year, GAR introduced a new forest conservation policy and this new approach is regarded as the most progressive in the palm oil industry. If fully implemented, it could have hugely positive impacts across the whole sector.

Our work against APP has focused upon asking it to follow GAR’s lead on sustainability, something that it is resisting ever more strongly. The previous weekend, as part of this work, I was due to take part in a trip to visit the forests of South Sumatra, to see the forest clearance for myself, along with a representative from WPP, the global PR giant who’s subsidiary Cohn and Wolf is APP’s PR agency.

And then things became a little surreal. I was tailed from my hotel in Jakarta on the Saturday morning by two plainclothes men, all the way to the airport. There I was stopped and shown a letter, apparently authorising my deportation. The only problem was it wasn’t for me – the wrong middle name, wrong date of birth, wrong passport number and no photograph. After much back and forth with my colleagues, the men left.

I was allowed to depart for the trip and whilst a number of ‘administrative hurdles’ were placed in our way en route, we were able to see some of the areas of deforestation caused by APP suppliers. These are areas the company claims are degraded and therefore suitable for clearing and replacing with plantations. But it’s a lie. They are continuing to clear huge swathes of natural forest, much of it on areas of deep peat, and much of it in areas mapped as habitat for the endangered Sumatran tiger.

And the bigger the lie becomes, the more the company throws time and money into covering it up. In Indonesia, this centres on trying to discredit the investigations of organisations like Greenpeace. Now some authorities are stepping in to try and stop those investigations from being conducted.

Around the world, the cover up is more obvious. It comes through a co-ordinated multi-million dollar global PR campaign including a series of TV adverts that have been on heavy rotation on outlets like CNN and Sky.

There is also a newspaper advert that states that, in order to see APP’s commitment to conservation, you just need to follow their tracks. Well, last weekend my Indonesian colleagues and I did just that. The tracks that we saw the company leaving are those left by the miles and miles of canals which have been cut through the vast peatlands in order to drain them.

Those canals are followed by the tracks of caterpillar diggers bulldozing their way through hectare after hectare of natural forest, clearing and stacking the timber before it’s transported to APP mills. The tracks left by APP are the tracks of the destruction on an industrial scale of Sumatra’s rainforests. It’s astonishing that the company maintains that these tracks can be easily hidden with a large PR budget.

This house of cards the company has built has already started to fall down. Mattel was the latest in a long line of major international brands to suspend contracts with APP. Others will surely follow. And eventually APP will have to reform.  The question for now is how long will it take, and what will be left of the few remaining large areas of rainforest in Sumatra when they do?

I hope to be allowed back to Indonesia again to support the fantastic work that my colleagues there are doing on this campaign. They are on the go 24-7, under extraordinary pressure and stress. Their work supports the commitments of Indonesia’s president who has pledged to stop the deforestation. It’s clear that if that commitment is to turn into reality, the campaign against APP must succeed, and soon.

To keep up-to-date with our campaign to change Asia Pulp and Paper, follow me on Twitter – @andyrtait