AGL, take note — the future of energy in Australia is 100% renewable, clean and affordable!

With huge potential to generate solar and wind energy, there’s no doubt Australia can become a renewable energy superpower. By phasing out coal, oil and gas, and ramping up wind, solar, hydro output and battery storage capacity — Australia’s energy grid will become 100% renewable, 100% self-sufficient, and 100% affordable.

So, what’s the problem? Well, major fossil fuel companies, like AGL, continue to burn coal at an extraordinary rate. It’s heating up our climate, polluting our land, air and water, destroying our health, and taking us further away from our goal to limit global heating to 1.5°C above pre-industrial levels.

As Australia’s largest climate polluter, AGL has a responsibility to replace its polluting coal fleet with renewable energy by 2030. That’s what both the UN and the International Energy Agency say is needed to cap temperature rise at 1.5°C. AGL currently plans to burn coal until 2048. But AGL doesn’t have to be Australia’s Greatest Liability — it can become part of the solution. 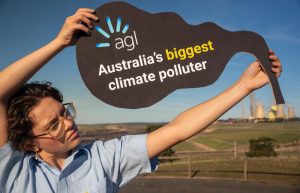 A Victorian School Strikers protest against AGL Energy’s burning of coal at their coal-fired power station, Loy Yang A, in the La Trobe Valley.

Change is happening globally — but Australia needs to get on board, ASAP

If you haven’t noticed already, global energy markets are going through a massive transitional phase — from dirty, polluting fossil fuels — to clean, affordable renewable energy. Australia’s status as a ‘coal capital’ once served us well, but now, the Morrison Government’s inability to guide the transition to renewable energy has put us at odds with our friends and allies and is making us outcasts on the international stage.

UN chief António Guterres has issued a clear, stern warning to climate laggards like Australia to end its “deadly addiction” to coal by 2030. Plus, the International Energy Agency has made it abundantly clear that if the world is to achieve net-zero emissions by 2050, new coal, oil or gas projects must come to an end this year. The world’s key players in the midst of a ‘green revolution’. The 2021 G7 summit saw the richest, most industrialised and most influential nations agree to stop investing in new coal-fired power projects beyond 2021 — citing the desire to achieve a decarbonised power system within the 2030s. 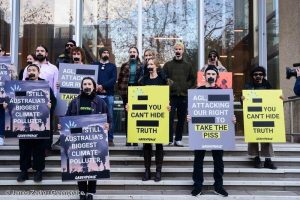 Greenpeace Australia activists in front of the Federal Courts of Australia.

A green future for Australia is inevitable

So, where does this leave Australia? The Morrison Government knows that the decline of coal, oil and gas is inevitable, and the fossil fuel industry knows it, too. That’s why some of Australia’s major polluters are already taking tentative steps towards a gradual shift away from dirty, outdated fossil fuels towards clean, green renewable energy.

For example, EnergyAustralia took a step in the right direction earlier this year when it announced it will close Yallourn Power Station in Victoria’s Latrobe Valley in mid-2028 — four years earlier than its scheduled retirement date — and build a new 350MW utility-scale battery in the region by 2026 to boost renewable energy storage capacity. Although more action is needed, this will reduce the company’s carbon dioxide emissions by approximately 60 per cent relative to today.

Plus, Australia’s third-largest emitter, Stanwell, recently announced its plans to abandon coal and pivot towards a future in renewable energy.

Renewable energy makes sense — because it’s cheaper than ever.

Recently, the CSIRO confirmed that even when taking into account extra system integration costs — solar photovoltaics (PV) and wind remain the cheapest new sources of electricity.

The price of solar is plummeting faster than any other energy technology! The major growth in both large-scale and small-scale solar installations allowed solar energy to contribute 34.4 per cent of all renewable energy generation in 2020. New small-scale solar added 3 GW of capacity to the energy grid and surpassed hydro to become Australia’s second-largest source of renewable electricity.

But the growth won’t stop there! A 2016 study conducted by the Institute of Sustainable Futures at the University of Technology Sydney found that — with proper planning and preparation, plus increased investment in wind, solar, and hydro — Australia could have a fully decarbonised electricity sector by 2030 and a fully renewable energy supply system, including transport and industry, by 2050. Amazing, right?

In 2020, each state and territory saw its renewable energy capacity grow by more than 20 per cent to reach a national capacity of 27 per cent — and it’s showing no signs of slowing down! Despite the presence of coal-obsessed, climate laggards within Parliament — states like Tasmania and South Australia are already proving that 100% renewable is 100% doable.

Upon reaching 100% renewable energy capacity in November last year, Tasmania is setting its sights on a target of 200% renewable energy by 2040. It’s expected that Tassie will produce twice its current electricity needs and export the surplus to the mainland via the proposed AU$3.5 billion Marinus Link cable.

South Australia continues to prove that it’s possible to shift from coal to clean energy without hurting the economy or energy supply. SA now has about twenty large wind farms and four large solar generators in the state, with many more projects in the pipeline, including big batteries. These projects will pave the way for SA to reach 100% renewable energy by 2030, at the latest. The turnaround is a pretty impressive feat, considering that SA was 100% reliant on fossil fuel as recently as 2006!

As a traditionally coal-dominated state, New South Wales is making waves with its Electricity Infrastructure Roadmap; promising to deliver $380 million over the next four years to support 12 GW of renewable energy capacity. Plus, a recent report by Reputex found that NSW can reach 100 per cent renewable energy as early as 2030!

The continued rise of clean energy is inevitable: it’s not a question of if, but when, Australia will be powered entirely by renewables

It’s expected that five of Australia’s remaining 16 coal-burning power stations on the east coast could become financially unviable as early as 2025. Propping up these dying and potentially near-stranded assets is pointless and expensive — especially when these facilities could be transformed into sources of clean, green, affordable energy for all Australians!

Greenpeace’s report — Coal-faced: exposing AGL as Australia’s biggest climate polluter — reveals that renewable energy technologies can be implemented at scale to replace AGL’s ageing coal-burning power stations, as has happened elsewhere around the world. In the UK in 1990, coal accounted for 75 per cent of all of its electricity generation — now, it’s just 2 per cent. Closer to home, New Zealand is set to reach 100 per cent renewable energy by 2030.

That’s why we’re calling on Australia’s biggest climate polluter, AGL, to be part of the solution. As a giant in the Australian energy sector, AGL can ensure this transition happens as quickly as possible by closing all its coal-burning power stations before 2030 and replacing them with renewable energy sources.

This is a once-in-a-lifetime opportunity for AGL, and other major polluters, to shift their focus and get on the right side of history. We know that it’s possible, and we know that it’s necessary — but we need your help to make it happen! So, will you join us in pressuring AGL to quit coal and switch to 100% renewable electricity?