From journeying to the centre of an atomic blast site in 1971, to having established organisations in over 57 countries, Greenpeace has come a long way in half a century.

In 1985, Greenpeace ship the Rainbow Warrior began “Operation Exodus” – the evacuation of the Rongelap island in the Pacific Ocean. Rongelap had suffered from the fallout of US nuclear tests in 1954. The islanders reached out to Greenpeace activists for help and on May 17 the Rainbow Warrior arrived in the area to help evacuate more than 300 people and 100 tons of building materials to the safer island of Mejato. 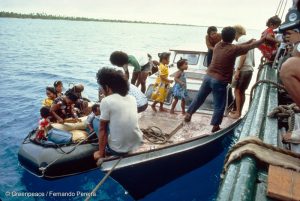 In 1975 Bob Hunter and other members of “Project Ahab” launched a campaign to save the whales, confronting Russian whaling Vessels off the coast of California. The brave activists quite literally put themselves in the firing line between Soviet whaling ships and the whales. Films and photos of the encounter were published around the globe.

Greenpeace has continued to run anti-whaling campaigns ever since. 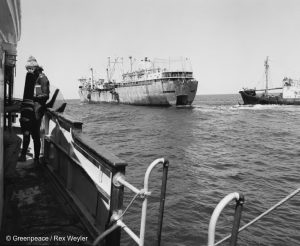 In 2010, massive pressure from consumers via social media, in addition to non-violent direct action by Greenpeace activists ensued against the Kit Kat brand in a global campaign. After 8 weeks, Nestlé agrees to stop purchasing palm-oil from sources which destroy Indonesian rainforests. 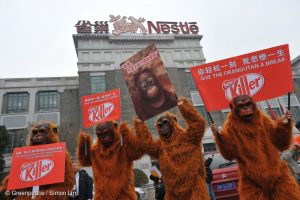 Four activists occupied the Brent Spar Oil Rig, in the North Sea in June 1995. Activists occupied the rig for more than three weeks as part of a coordinated worldwide campaign putting pressure on Shell’s proposed “deep sea disposal” of the rig that included dumping 11,000 tonnes of oil into the ocean. The campaign was eventually successful with Shell abandoning its plans to dispose of the oil rig in the ocean. 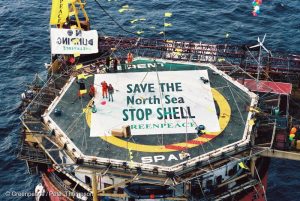 After the Fukushima nuclear disaster in Japan, Greenpeace conducted a radiation survey on the nearby ocean, and carried out spot surveys of seafood at five major supermarkets. Greenpeace encouraged voluntary inspection of radioactive materials in supermarkets, and in November of the same year, AEON, the largest supermarket chain in Japan, announced its “Zero Radioactivity” target declaration, and began strengthening its voluntary inspections and adopting its own standards. 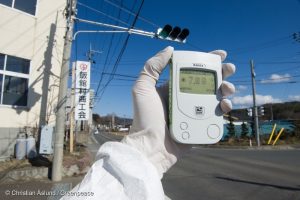 Greenpeace activists helped with the clean-up operation after a massive oil spill occured off the coast of Alaska. Activists assist with scrubbing and rehabilitation of the area. They document the impacts of the environmental disaster, which was the second largest oil spill in United States history. 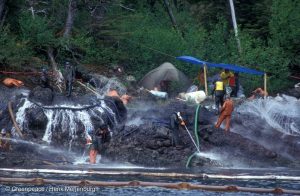 The World Park Base was established by Greenpeace in 1987. A year-round Antarctic base, and the first to be run by a non-governmental organisation. The base was created so Greenpeace could have a seat at the bargaining table for the Antarctic Treaty Nations. The team operating the base monitored pollution from neighbouring bases and held countries accountable for their actions in the area. Greenpeace made headlines when 15 protesters blocked the French from building an airstrip that would have involved dynamiting habitats of nesting penguins. The base was closed when the members of the Antarctic Treaty agreed to adopt a new Environmental Protocol, including a 50-year minimum prohibition on all mineral exploitation. 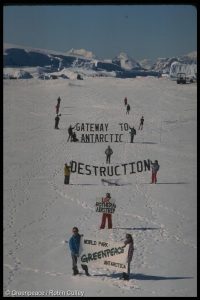 Greenpeace collects the UNEP Ozone Award for the development of “Greenfreeze”, a domestic refrigerator free of ozone depleting and significant global warming chemicals.

The “Greenfreeze” system was made freely available for commercialization and is now marketed by several large European manufacturers, with several major companies in China considering a shift to the use of hydrocarbon coolants. 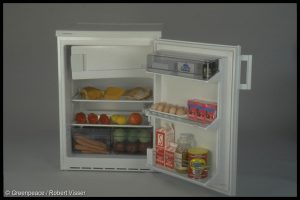