By David Ritter - Posted in ABC Environment 10 July 2015 Today marks the 30th anniversary of the bombing of protest vessel, the Rainbow Warrior. As much as ever, small voices need to join a chorus to show our leaders what is right.

IF A POLITICIAN were to suggest testing nuclear weapons in the Pacific today, they would rightly be thought to have lost their minds; be out of step with reality and the common good, and certainly at odds with the global mindset. 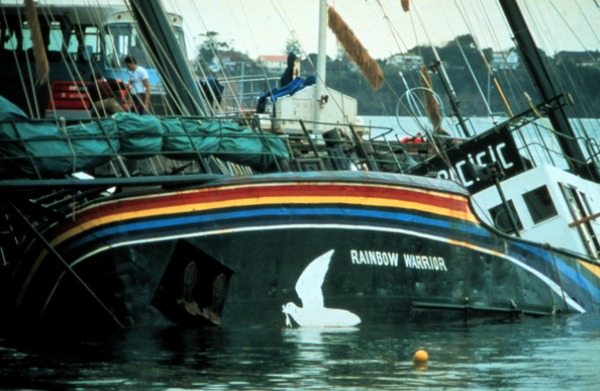 Thirty years ago, it was a different time and the exploding of nuclear bombs beneath the Pacific Ocean was routine. But it was even then not acceptable, and it did not go unchallenged.

On this day three decades ago, a dozen courageous people were preparing to sail from Auckland in the Greenpeace ship, Rainbow Warrior. They planned to put themselves in the test zone at Mororoa Atoll, in opposition to the planned detonation. They carried with them the hopes and voices of many more people from around the world.

The ship had already been working in the Pacific before arriving in New Zealand. The crew had been evacuating the entire community of 350 people from the island of Rongelap to a less contaminated island — effectively making them nuclear refugees from the US nuclear test program that had gone on there during the 1950s. The Greenpeace photographer Fernando Pereira’s powerful images of the horrific impact of previous tests on their bodies and homes had been seen around the world.

The Rainbow Warrior never left Auckland. French secret service agents detonated two bombs below the water line, close to midnight, sinking the ship at the dock and killing Fernando. He was 35 years old and had two small children.

State-sponsored terrorism stopped that voyage, but it did not stop the protests. One supporter coined the slogan: “You can’t sink a rainbow” and that spirit, and the memory of Fernando, is now as much a part of the Greenpeace DNA as is non-violence and civil disobedience.

In the last thirty years, individual and collective acts of courage have been the hallmark of peaceful protests around the world, by environmentalists as well as human rights and social justice campaigners. And it has come at too high a price for many. Last year 166 people died defending the environment. Since 2002, 900 defenders of humanity’s common heritage have been killed.

These are the people we know, the names we can count — but what of others? The global threat we all face today is climate change. It is driven by coal and oil, and is already reshaping our lands and seas, with stronger and more frequent droughts, storms, floods, and bushfires; warming seas and coral bleaching. It is creating climate refugees and it is killing people. According to the Pentagon, it is a national security threat greater than terrorism.

Australia is exporting and fuelling that climate change. While even the worst emitters are finally conceding that action needs to be taken, the Abbott government wants to build Australia’s biggest carbon bomb — the Carmichael mega-mine — and Abbot Point port expansion along the Great Barrier Reef. It is tragically ironic that the government’s own scientists say the Reef’s greatest threat is climate change, and that we can have coal expansion or a healthy Reef, but we can’t have both.

But the Abbott government has signalled that speaking out on any issues is not welcome in Australia. Health workers in Nauru can now be jailed for reporting child sex abuse at the detention centres. Within the environment movement, a federal parliamentary enquiry is being mounted into how environmental organisations use tax-deductible income, but no such enquiry is being held into the coal companies who do the same, despite repeated requests. The Environment Minister has created a wind ombudsman to manage complaints about this form of renewable energy, but no coal ombudsman has been, or will be, appointed. Peaceful environmentalists in Australia have been vilified and condemned for simply daring to dissent.

It takes courage to speak out, to make a stand. And it comes in many forms — from peaceful direct action to writing letters; making phone calls; even talking to neighbours about your beliefs. But when those acts of courage multiply and become one global voice — that is when change comes.

And what can be more Australian than having a strong opinion and making sure it is heard?

Almost without fail governments and corporations have underestimated ordinary people and the power they wield. No one believed that people taking to the street, to boats, to pen and paper and even the payphone on the corner back in 1985, could change the global policy on nuclear testing. But they did.

So, what will we say thirty years from now? Will the idea of cooking our planet be as insane as it was to nuke it? Will the voices of the millions of people worldwide have got through? I believe it will. Not because the politicians acted, but because the people will decide.

David Ritter is the CEO of Greenpeace Australia Pacific.